The History of the Margherita Pizza

At 11 Inch Pizza, we pride ourselves on making the best margherita pizza in Melbourne. We believe that knowing the history of the margherita pizza (or pizza margarita) is essential to maintaining the quality of our pizzas. It gives us a sense of the long history of the art of making pizz. Plus, it provides us with a sense of purpose, knowing that we are part of that long history.

Margherita pizza is known for its ingredients representing the colours of the Italian flag. These ingredients include red tomato sauce, white mozzarella and fresh green basil. When all of these delicious flavours are combined on a hand-kneaded pizza base, a universally-adored pizza is created.

The city of Naples in Italy is widely known to be the home of pizza. Napels was founded as early as the 16th-century. The majority of the population was very poor and so pizza – flatbread with toppings that was sold by street vendors and could be eaten for any meal – met the needs of Neapolitans as a food that could be eaten quickly and was cheap.

These early iterations of pizza were usually topped with a variety of things, such as tomatoes, cheese, olives, anchovies, and garlic. The famous French writer, Alexandre Dumas, even described the wide array and diversity of pizza toppings in 1843. 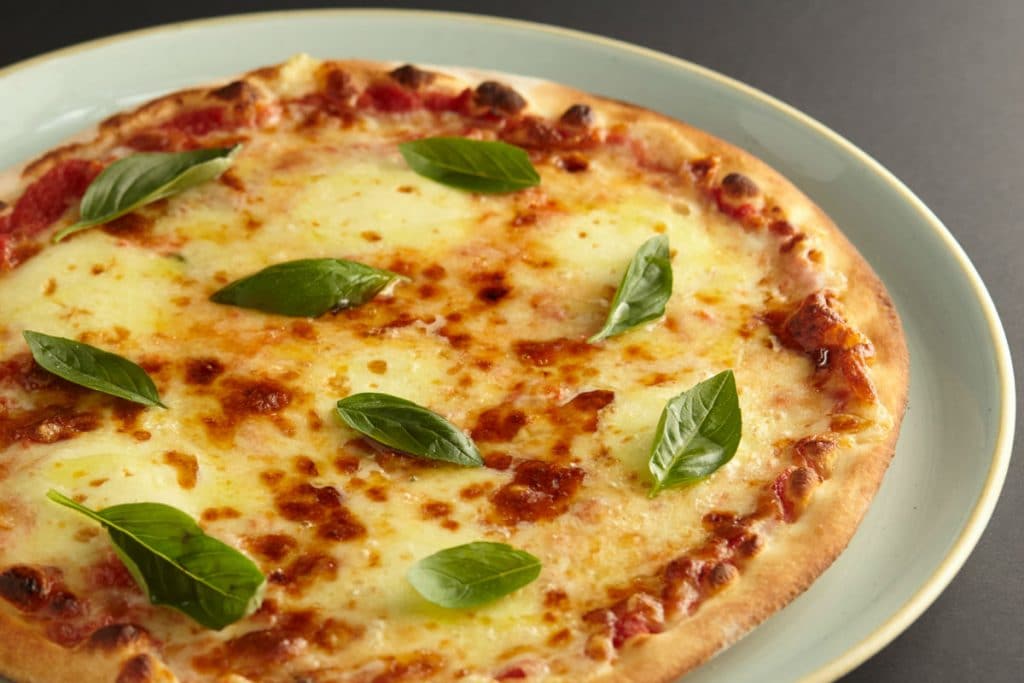 The most popular account of the invention of the margherita pizza starts in 1861, which was the year Italy unified. In 1889, King Umberto I and Queen Margherita visited Naples, which had formerly been the capital of the southern kingdom.

Supposedly, Queen Margherita was bored of the gourmet French food that was, at the time, very popular with European royalty. As such, she summoned Raffaele Esposito, who was the most famous pizza-maker in Naples at the time. Queen Margherita commissioned Esposito to make three different pizzas for her.

Legend has it that the first two pizzas that Esposito and his wife made were not to the Queen’s tastes. These included pizza marinara, which featured garlic, and pizza Napoli, which featured anchovy. The third pizza—inspired by the colours of the Italian flag—the Queen approved. Esposito immediately named the pizza after Queen Margherita and asked her for a Royal Seal.

The note which a chamberlain sent to Esposito still hangs in the pizzeria he worked at, Pizzeria Brandi. However, the veracity of this note has been contended amongst historians for several reasons. Historians have questioned: the disparities between the royal stamp and other royal stamps of the time, as well as its placement; the stationary used to write the note on; and the discrepancy in the handwriting, which was supposedly written by the chamberlain Camillo Galli.

The question of this note’s possible forgery has led many to questions. Is this fable regarding the Queen of Margherita even true to begin with? Or,  was just a fabrication to sell pizzas during a hard time?

Nonetheless, the popularity of the margherita pizza is undeniable. Its deliciousness has stood the test of time.

Pizza made its way outside the walls of Naples with the immigration of Italians to the United States around the late 19th century. Initially, peddlers would sell their pizza on the streets for two cents a slice. However, small cafes and grocers soon began to sell pizza to cater to Italian American communities.

It wasn’t until the 1940s, however, that pizza consumption extended beyond Italian immigrants and their descendants. Veterans returning from the Italian Campaign during World War II had been introduced to pizza while in Italy and discovered just how delicious it was. From then on, pizza consumption in the United States explode. Many modern-day pizza chains were introduced.

Similar to the United States, it was Italian immigrants who brought their pizza traditions to Australia when they arrived here during the gold rush. However, with the mass migration of Italians to Australia during the 1950s and 60s, as a result of World War II, pizza made its way into the mainstream consciousness.

At 11 Inch Pizza, we love how the cultural crossover of pizza reflects our modern-day multi-cultural society. By blending our cultures we can make something that is truly unique and special. That is why we are so proud to be a part of the ever-continuing history of the margherita pizza.